The 2-day Martinborough Fair was the brainchild of members of the Greytown Rotary Club, and in 1977 the first Fairs began in Martinborough with just 35 stalls.
In order to attract stallholders the Fairs were promoted in  Manawatu and Wellington.

The basic philosophy and objectives behind the Fairs has changed little since 1977.
The Fairs' objectives are to:
The Martinborough Fairs provide a focus to publicise Martinborough, the South Wairarapa, and Rotary.
South Wairarapa Rotary, through its Martinborough Fair Trust, holds the management and ownership of the Martinborough Fairs.
The club contracts numerous community groups to assist on Fair days to handle parking, and other operational matters.
The idea of a country fair came from Bill Fetch, who became a Rotarian in 1972.
Bill had travelled to Germany for an operation and was much taken with the village markets there.
He felt that the Martinborough town square, with its open space and lovely shade trees would make an ideal venue for a similar fair. He believed that Rotarians could provide the organisational framework to allow craftspeople to sell their wares. Bill wanted any profits made by the Club to be given to local South Wairarapa charities -especially those connected with youth.
At ﬁrst Club members were opposed to the idea. In September 1975, the Directors voted against it. “It will cost the club money - the idea wouldn’t take on," people said. The whole matter was of such little importance that it didn’t rate a mention in the minutes. Finally, in October 1976 the Directors (Athol Ross, President) with some dissent, gave their approval. The Community Service committee chaired by Doug Banks would supervise the project.
Three club members unofficially offered, if necessary, to meet any loss to the club.
As the fair required the closing of the square and the eight roads leading into it. Bill had to get the local council’s buy-in and Mayor-Dawson Wright on his side. At a meeting of the Rotary Club in Martinborough earlier in the year, Dawson had seen the potential of the fair to lift the image of Martinborough - but he also felt that the fair would enable local charity groups to help themselves. Dawson soon had his Council on side. From then on, his support never wavered, always ready to help in crises. The Rotary Club honoured this support by awarding Dawson Wright a Paul Harris Fellowship in 1993.
Bill Fetch was determined, dogmatic and intolerant. People gave in to him in self-defence: but he was keenly interested in young people.
He eventually cajoled reluctant members into supporting the first Martinborough Fair.
In 1993, the Club honoured him by placing a memorial plaque to him in the square in Martinborough.
The first fairs were organised by the community service committee of the Rotary Club. This group consisted of: Doug Banks (Chairman), Bill Fetch (Convenor), Gordon Wills-Johnson, Jim Gaskin, Athol Ross (Club President), and a newcomer to the Club, Doug Palmer. Cecily Palmer acted as secretary. The driving force, of course, was Bill Fetch.
As organisation for the first fair got under way, applications for stall sites came in slowly, but finally, on 12 February there were 35 stalls - at $20 a site.
As the ﬁrst fair day dawned, the Committee was on the job early, ready for a 10.00am start. Athol Ross remembers looking down Kitchener Street as he stood in the square - not a single car in sight - but by start time a good crowd had arrived. Dawson Wright turned to the committee and said: “It’s a success!"
The Club Directors had been worried that little money would be made -and therefore organised its own stall to help raise funds. Doug Banks sold helium-filled balloons to children, Brian Haigh sold coloured wool ﬂeeces to spinners, and goods were sold on commission. Apples and vegetables were bought from Greytown and on-sold at the Fairs.
The total profit of that first fair was $509, but the surplus was due mainly to the Rotary stall — the actual fair organisation showed a small loss.
The basic philosophy behind the Martinborough Fair has changed little over the years. The organisers hope to:

(1) Give Craftspeople a chance to display and sell their wares.
(2) Give local charities a chance to raise funds from a wider range of customers than is usually available.
(3) Provide the Rotary Club with funds to give to charities, especially those in South Wairarapa. In accordance with Bill Fetch’ s wishes, special funds have always been set aside for young people.
(4) Publicise Martinborough, South Wairarapa and the Rotary

Within two years a special committee was running the fairs. A year or two later it had a separate bank account. By 1989, it ran its own affairs, returning all profits to the Club Directors each June. In 1990, the board decided that the chairman would automatically become a Director. This helped maintain contact between Club members and the committee.
As the popularity of the fairs grew, the committee found that it didn’t need to persuade stallholders to come - they queued up. Increasing demand meant that the square had to be surveyed (by Doug Williamson) and marked out carefully in sites measuring 20ft by 12ft. This was done to make the setting up more orderly on fair mornings - and to prevent stallholders camping out on select sites on the Friday evening.
Bill Fetch ran the fairs until his death in June 1980, then John Jacobson and Tony Sim did a year each. From 1983 to 1988 Athol Ross ran the show, and from 1988 to 1993 the job fell to Peter Werry. Lindsay Wall became the chairman in l994. The club owes these men a great debt of gratitude for their efforts.
Local charities found that the best way to make money was to sell food - sandwiches, hot dogs, paua fritters, cakes, ethnic food, hangis, etc. It was certainly hard work but proﬁts from $2000 to $2500 were frequent. The Martinborough Squash Club, for example, paid all maintenance costs on its building from fair income and the Martinborough Anglican church raised enough to pay its mission quota each year.
Martinborough shops and other Wairarapa retailers all benefit from the fairs. Lotto does well in Pain & Kershaw, Greytown orchardists report increased turnover and Featherston Gas station puts on extra staff. Hotels, motels, and camping grounds are mostly full, and many private homes overﬂow with out-of-town visitors.
Thanks to the hard work of Rotarians, Lions and many support groups, and especially the conveners and their committees, the Martinborough Country Fair is now well established as the premier weekend attraction in Wairarapa’s annual calendar of events. 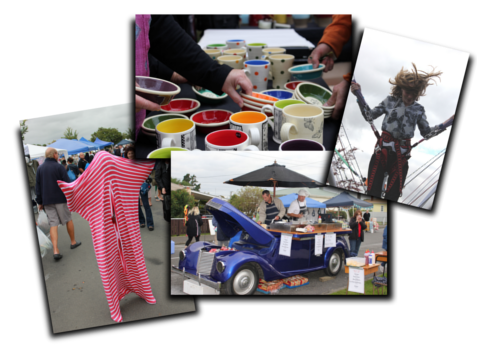